It is a Strange and Beautiful World

“It is a strange and beautiful world.” — Roberto, the Italian tourist in Jim Jarmusch’s quirky 1986 movie, Down by Law

Rosslyn Chapel is a medieval church in Scotland originally made famous because of the beauty of its architecture and storied history.  It began experiencing a bit of a renaissance as a tourist attraction recently though when Dan Brown included it as one of the stops in solving the mystery of the Holy Grail and the Knights Templar in The Da Vinci Code.

Perhaps it’s the unprecedented number of visitors that now stream to the chapel that enabled conservators to begin some important and necessary conservation work.  So, it was only recently that a stunning and remarkable discovery was made.  Hidden in a part of the roof system called the “pinnacles,” which had been dismantled by the stone masons for the first time in hundreds of years while restoring the chapel, there were cavities ideally suited to, and in fact created for (wait for it) … beehives.

No, I am not kidding. 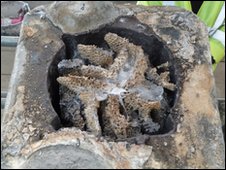 Inside the stone pinnacle, evidence of a long-gone working hive.

The chief architect of the restoration, Malcolm Mitchell, said  it appeared that the hives may have been used by bees as far back as the 15th century.  “It was particularly a surprise because the hives themselves are the ideal size for bees to inhabit — hollowed out to the size of a gas cylinder — but they were constructed purely as a haven for the bees. They weren’t built to harvest honey.”

There is no documentation (nor any known reason) that would explain why the masons who built this chapel might have included stone beehives on the roof.  There are anecdotes throughout history, though, of worshipers being bothered by bees during the services.  Those medieval masons were so … what’s the word … puckish!

Manmade stone beehives unnoticed for centuries in the roof of  a medieval chapel.

Get to Know Wild Bee Hotels